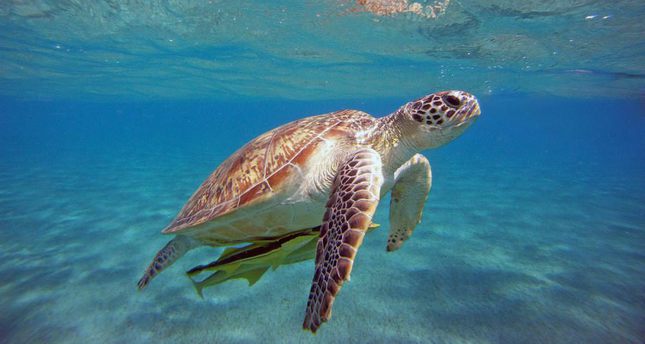 Sea Turtles found on the Sandy Beaches of SW Florida

As you stroll our beautiful beaches in SW Florida, do not be surprised to encounter multiple sea turtle nests staked out by our local organizations as pictured below.

What Type of Sea Turtles are found in SW Florida 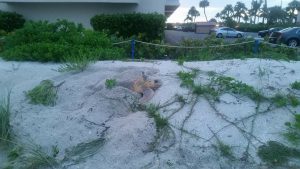 Loggerhead (Caretta Caretta) – The name originating from their large block-like heads, these are the most common sea turtles found in SWFL. Their average size is about 36” in length and estimating a weight of almost 300lbs! The shell of the this sea turtle is typically reddish brown and their skin ranges from yellow to brown. They have four flippers each with two claws and have large powerful jaws to crush their prey/food. You can usually decipher whether they are male or female by the size of their tail; the males being longer and the females being shorter. Their lifespan is between 47-67 years. This species has been on earth for 110 MILLION Years!  To the left is a recent picture of a sea turtle laying her eggs on Bonita Beach in Bonita Beach Club!

What do Loggerhead Sea Turtles eat?


Whom are the predators of the Loggerhead Sea Turtles?

Birds, snakes, ghost crabs, raccoons and ants are among the few predators or the Loggerhead eggs/nests. Crabs, lizards, snakes and birds are among the predators that prey on the baby turtles during their migration to the sea. Large sharks, seals and killer whales tend to pray on the large adult sea turtles.


When Do Sea Turtles Nest? 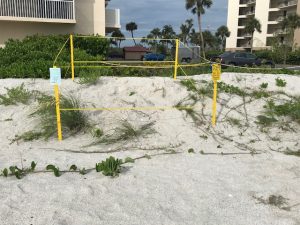 The loggerhead sea turtles usually make their way to the beautiful sandy beaches in SWFL between the months of May through October to nest. The female loggerheads will come to shore in the middle of the night and lay about 50-200 eggs. 60 days later, the eggs begin to hatch, usually this too happens in the middle of the night. The baby sea turtles use the moon to guide themselves back to the water. On average there are about 67,000 nests built each year in Florida from this incredible creatures!  Pic attached is a nest staked off on Bonita Beach in front of the community named Hickory Pointe.


What is the Reproduction Process of Loggerhead Sea Turtles?

The female Loggerheads migrate to warmer waters for their mating grounds. The age of sexual maturity is between the years of 17 and 33. Their mating periods have been documented to last more than 6 weeks! Once a male finds a female they begin to circle one another, there are often numerous males around at this time and they may struggle with one another for the female. When they have chosen one another, the male then mounts the female. He uses his claws to grip on to her 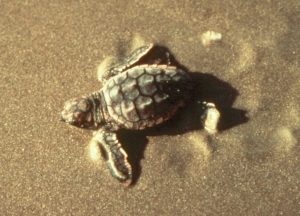 shoulders, lays his head on her shell and then uses his tail to bring their reproductive organs together. While this is happening other males may still attempt to attack the male to win the female over. From the act of mating, the females ovulate eggs which are fertilized by the males. Once they are done mating, the female returns to the SAME beach where she herself was born to lay her babies! The females are able to lay multiple clutches and once this happens she is able to re-mate once or several times and this could take place by multiple males. They are known to mate one to seven times during their nesting season every two to three years.

In 1978 the Loggerhead Sea Turtles were listed on the Endangered Species Act and are under Federal Protection. Due to their migratory nature, the conservation efforts are severely compromised once they leave the United States waters. Loggerheads have also long been hunted for leather production and their eggs. High threats also include; marine pollution, accidental capture, disease, and their hatchlings suffering from disorientation from beachfront lighting.

Loggerheads are protected by National Laws as well as international treaties and agreements. The U.S. Fish and Wildlife along with NOAA’s National Marine Fisheries Service also conduct regular monitoring of the Loggerheads population.


What Can I do to Help Protect the Sea Turtles on the SWFL Beaches?

There are currently no active listings that match your search criteria.

The Importance Of Staging Your Home For Sale
June 27, 2018

Copyright © 2015 Mid Florida MLS. All rights reserved. The data relating to real estate for sale on this web site comes in part from the Internet Data Exchange Program of Mid Florida MLS. Information provided is for consumer's personal, non-commercial use and may not be used for any purpose other than to identify prospective properties consumers may be interested in purchasing. participates in the MFRMLS Internet Data Exchange (IDX) program, allowing display of other MFRMLS broker’s listings on this site. However, Steven R. Daria - MAXIM LLC may not include all listings currently available. Information is deemed reliable but not guaranteed.